July Plett news all about flamingos, sunfish and Robberg thanks to various publications.  Today’s post on our instagram page has some beautiful photos of flamingos.

The flamingos are back – Plett news 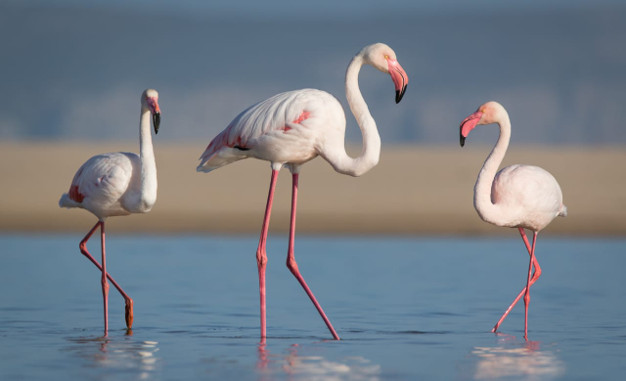 Residents and visitors in Plett have enjoyed the yearly visits from a small group of greater flamingo, once thought to be a ‘fluke’ visit.

Nine or ten years ago it was two or three occasionally seen in the lagoon during the end of summer. Now the flock has grown to many more birds.

These graceful birds are close to 6 feet in height. The greater flamingo has pink feathers and black-tipped wings.

These remarkable birds do not breed much in South Africa. Their breeding grounds are Sua Pan in Botswana and Etoscha Pan in Namibia. The average lifespan is 60 years. The greater flamingo has a very unique feeding system –wading with their bill upside down, filtering out small organisms, which they can often be seen flushing out with sharp foot movements. The bill has filter membranes.

We are very fortunate to have these remarkable birds visiting in Plettenberg Bay, a testament to the conservation efforts of the Bitou Wetlands and surrounding birding areas. Visitors are encouraged to visit, but not to disturb or disrupt the birds by getting to close or allowing dogs on the premises without a lead.

The team from Nature’s Valley Trust last week laid eyes on a rare find after they were alerted to an ocean sunfish that had washed up on Nature’s Valley Beach on Wednesday 8 July. It was no longer alive.

The NVT team found the body of the fish close to the mouth of Groot River.

For those unfamiliar with this sea creature, the ocean sunfish is one of the largest fish with a skeleton made of bone instead of cartilage and, and unlike much bony fish, do not have any scales.

According to NVT’s Christopher King, the ocean sunfish is found in five of the seven oceans with the exception of the icy polar waters. “Therefore it is understandable that at some point one would wash up on the beaches of the Southern Cape,” King said. “However, it is definitely not a common occurrence as the species does not occur in large numbers in general.”

He also explained that sunfish typically occupy the first 200m below the water’s surface, “basking in the sun” and feeding on fish such as jellyfish or blue bottles.

“Sunfish can reach lengths of 3m and weigh around 2 tons. This was an average-sized sunfish measuring 114,7cm from the mouth to the tail and 229cm from fin tip to fin tip.”

Despite it not being one of the larger specimens, King said they were still fascinated by the find. “It is not often that we get to see one of these gentle giants in the flesh,” he noted.

‘We bring you the latest Plettenberg Bay | Garden Route news’

Hikes to dream about after lockdown &#8211; Robberg!